Here are the cheapest airfare deals to Frankfurt. View Flights to Germany

It may be the business capital of Germany, but Frankfurt is anything but dull, being the birthplace of Goethe and now hosting both the European Central Bank and the Frankfurt Book Fair. It's a bustling international hub with plenty to see, do, and visit during your stay. About 25% of Frankfurt's reisdents are foreign nationals, and another 20% are foreign-born, meaning that Frankfurt is one of the most diverse and interesting cities in Germany, if not in Europe, and transport links are excellent.

Having a continental climate, the best time to visit Frankfurt is during the summer months, as winters are very cold (although it rarely snows in Frankfurt). If your visit coincides with a trade fair, you may find it harder than usual to get accommodation in the city. Filled with skyscrapers, Frankfurt is affectionately nicknamed "Mainhattan", and has a collection of impressive museums and galleries that's second only to Berlin.

The Staedel Museum is packed with Renaissance and Impressionist paintings, and is a must for any art-lover. Additionally, the gardens are gorgeous and perfect for a stroll on a warmer day- and totally free for the use of the public. With free wifi, a pretty cafe, and a well-stocked bookshop, it's possible to spend most of the day here. For a little variety, the Main Tower offers incredible views over the city and is a big hit with adults and kids alike. Open until 11pm, it's a great after-dinner activity and a romantic look-out point as the sun goes down.

Foodies will find much to write home about with the Kleinmarkthalle: based in the old city centre, it's the go-to place for fresh fruit and vegetables, local meats and cheeses, sandwiches, and food on the go. Glasses of wine or beer, plus the obligatory wurst and pickles are a must for any visitor.

For an infusion of serene nature in the heart of the city, the Palmengarten is ideal. Complete with hot houses of tropical plants, a museum, a rose garden, a book shop, and a cafe, the Palmengarten is the perfect place to go with children, on a romantic stroll, or simply to unwind in the middle of Frankfurt. For a traditional German town square, head to the Frankfurter Romer: with lots of bars, shops and restaurants catering to the city's many visitors, it offers a buzz and a really continental atmosphere away from the high-rises and skyscrapers. 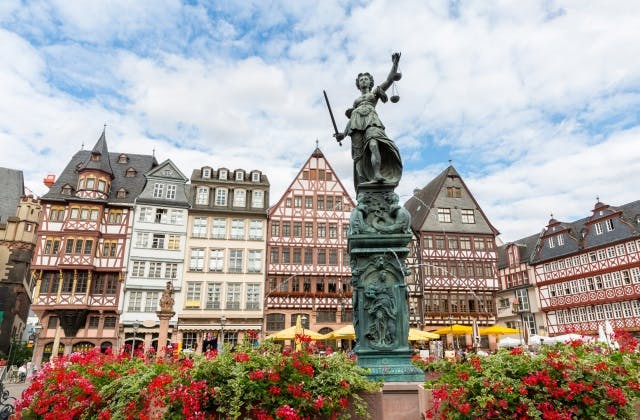 What is the cheapest month to fly to Frankfurt from Brisbane?

Currently, May/2020 is the most affordable month to fly to Frankfurt from Brisbane.

What airlines fly direct to Frankfurt from Brisbane?

No airlines fly direct between Brisbane and Frankfurt.

What is the cheapest airline that flies to Frankfurt from Brisbane?

The cheapest airline to fly to Frankfurt from Brisbane is British Airways.

What is the best airline to fly to Frankfurt from Brisbane?

The best airline to fly to Frankfurt from Brisbane is Qatar Airways.

What people are saying about Frankfurt right now:

Airlines that fly to Frankfurt :