Here are the cheapest airfare deals to Dallas/Fort Worth. View Flights to United States (USA)

A large bustling city in north-east Texas, Dallas is a friendly place where the pioneering spirit of its early inhabitants is still much in evidence. Established in 1841 in former Spanish/Mexican territory, the town gradually developed from a farming and ranching community into a regional industrial centre, helped by the coming of the railroad and growth associated with the cotton and oil industries. Modern Dallas reflects both its position in the modern world and the Southern elegance and Old-West charm of its former days.

Hot and humid in summer, the Dallas climate is at its most pleasant in spring and autumn. Blessed with good transport links – two large airports and a comprehensive highway network – the city is very accessible to visitors who will find residents normally refer to the whole of the sprawling Dallas-Fort Worth urban district as the 'Metroplex'. Travel within Dallas is equally easy for sightseers thanks to high-quality local transport via rail and bus services.

The West End of Dallas is the most historic part of the city with its redbrick architecture and host of attractions, many focussing on old-time Texas or Victorian themes. In addition, this popular sector also has a plentiful supply of clubs, bars, restaurants and shops. Nearby, the district of Deep Ellum, a settlement founded just after the Civil War by freed slaves, has become an important part of the Dallas music scene. Live bands are a regular feature here, drawing crowds of music fans into the area to enjoy a diverse selection of performance styles and genres.

With typical Texan flair, the Reunion Tower attraction provides its visitors with a series of unforgettable views across Dallas and Fort Worth. Known to locals as 'the ball', the tower has a spectacular, 360-degree viewing platform called The Lookout, reached via glass elevators. On slowly revolving platforms above, diners can enjoy a luxurious full menu, whilst those venturing to the topmost level are treated to more food, plus cocktails and entertainment.

A Texas rodeo is a powerful reminder of the sights and sounds of the cowboy era, and Dallas is the place to witness rodeo at its most skilful and spectacular. Beyond this, the city Arts District has museums dedicated to art and natural history, whilst on the southern edge, the Dallas Zoo features a mix of rare and endangered species alongside child-friendly 'hands-on' encounters. And for football fans, no visit to the city would be complete without a trip to the Texas Stadium, home to the famous Dallas Cowboys. 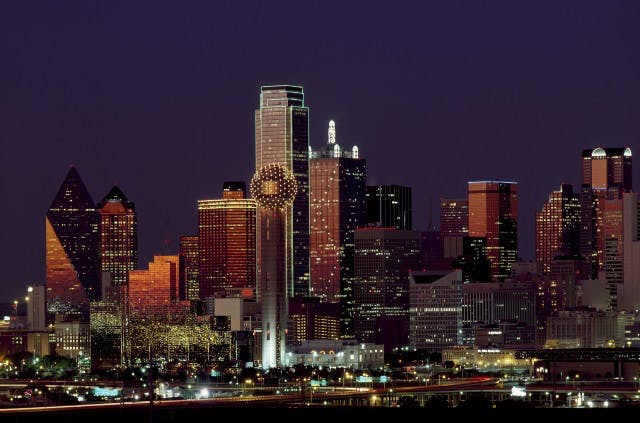 What airlines fly non-stop to Dallas/Fort Worth from Vienna?

No airlines fly direct between Vienna and Dallas/Fort Worth.

What people are saying about Dallas/Fort Worth right now:

Airlines that fly to Dallas Fort Worth :