Here are the cheapest airfare deals to Rome. View Flights to Italy

As one of the most beautiful cities in the world, Rome has it all. From millennia-old architecture and a fascinating imperial past to being the spiritual capital for the world's Catholic population, Roman dining and people-watching is also second to none.

The historic centre of Rome is, unsurprisingly, a UNESCO World Heritage Site. With 2.6 million inhabitants in the city itself, and just over 4 million in the greater metropolitan area, Rome is surprisingly small, and crowds over its hills to the banks of the Tiber. Packing a vast amount into a relatively small space, visitors will find that for the most part, the centre of Rome is quite walkable, while buses, the metro, and -if you must- taxis can take up the slack if the heat gets too much. Speaking of which, Rome is best avoided in August as it's crowded and almost unbearably hot- and, traditionally, this is the time when many Romans go on holiday, so many smaller independent restaurants and shops are closed during this time.

Now for the sights! If you can time your visit right for May, make the most of the Settimana dei Beni Culturali: a 7-to-10-day period in which all of the government administered landmarks and sites are totally free of charge, and this includes the Colosseum and the Forum. One must-see sight at any time of the year is the Pantheon with its incredible oculus. It dates back to 125AD and is truly stunning, as well as being free to enter.

With over 900 churches in Rome itself, you could make a trip purely out of touring them to view the incredible works of art and richness to be found inside. Four main churches are visited by modern pilgrims to Rome: St Peter's, St Paul Outside the Walls, Santa Maria Maggiore, and San Giovanni. Those less ecclesiastially-minded may just want to stop by St Peter's Basilica, or to the pleasingly creepy Santa Maria della Concezione, which contains mummified monks and skeletons and skulls on full view in the crypt. The Vatican and the Sistine Chapel are of course top of most visitors' lists, so prepare to get up early and queue for a long time.

Those with a taste for quirky landmarks may also like the cat-ridden Protestant Cemetery, the burial site of English poets Keats and Shelley. And don't forget to throw a coin into the Trevi Fountain to ensure your return to Rome. 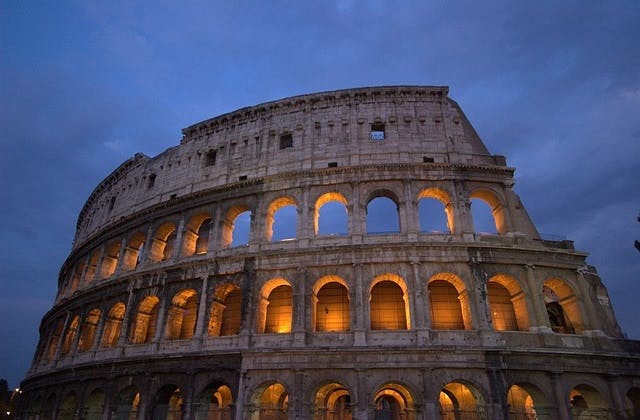 What airlines fly direct to Rome from Chicago?

What is the best airline to fly to Rome from Chicago?

Emirates is the best airline to fly from Chicago to Rome. If you want direct flights then Lufthansa is best. Norwegian is the best budget airline.

What people are saying about Rome right now:

Alitalia schedules flights between Dublin and Rome - RTE.ie
Twitter: From user 'Debs Amos'
RT @cliff_moffett: #askskynews CAN I ASK WHY ARE UK AIRPORTS STILL ALLOWING FLIGHTS TO COME IN FROM PLACES LIKE SHANGHAI, MADRID AND ROME?…
Twitter: From user 'Observista'
RT @minefornothing: UK-bound flights from New York, Tehran, Rome and Beijing all took off yesterday INSANITY
Twitter: From user 'Suzan Salama'
@CrisiscenterBE @be_gezondheid @SanteBelgique Hello, I'm in Amsterdam and since there aren't direct flights I have… https://t.co/0DJfcaBhMF
Twitter: From user 'Rhode Island Red'
RT @CallingBSonU: Flights out of NYC should have already been suspended as well as closing bridges and tunnels leading out of it. NYC is t…
Twitter: From user 'Campbell Young'
@susannareid100 @GMB @Chrisitv Time for a statement on how many of these are essential and how many non essential.… https://t.co/BE205biVBD

Airlines that fly to Rome :